By Guided Tours Greek alphabet, The Greek Alphabet No Comments 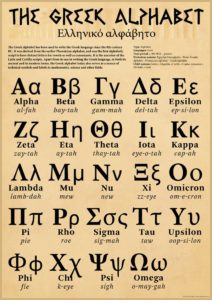 The word “Alphabet” comes from the two first letters of the Greek Alphabet: Alfa and Beta. Because many of the Greek letters are different from the Latin ones, this becomes something of a deterrent for those trying to learn the language, and just the expression “It’s all Greek to me” tells a lot about the attitude many people have towards Greek.

A lot of the Greek words are actually words we use in our own languages.
And yes, it IS a difficult language but it’s not THAT difficult that you can’t learn it. You can learn to make conversation with a little effort, and if you are able to read the letters, you’ll find that