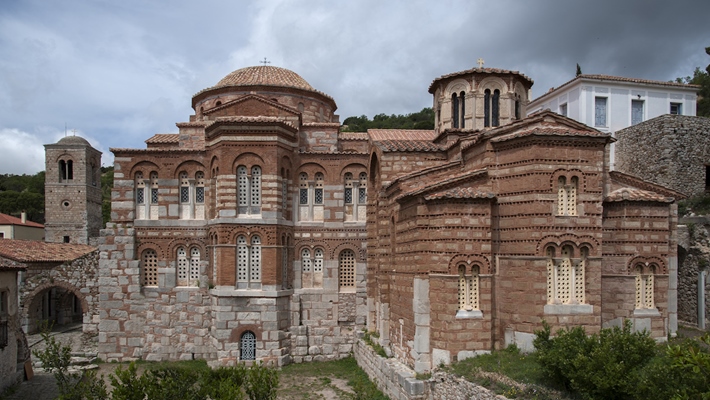 The monastery of Hosiοs Loukas, located in a beautiful landscape is considered to be one of the most significant monuments of the Middle-Byzantine Period.
The first monastic community was founded by the popular local hermit Hosios (i.e. the Blessed) Loukas himself, who settled there in 946. The information derives from the Life of the Saint, an important textual source which was written a few years after his death. With funding from Krenites Arotras, the General of the Theme of Hellas, the Byzantine military – civilian province in southern Greece, the saint built a church dedicated to Saint Barbara. In 953, after the Saint’s death, the reputation of his miraculous relics and the consequent influx of numerous pilgrims in the Monastery led to the construction of new, monumental buildings.
Shortly after his death, in the second half of the 10th century, the church of Theotokos was erected, the first and most elaborate example of the cross-in-square complex four columned type in Greece. This building became a model, followed by many other churches, and its architectural type prevailed in Byzantine religious architecture of the Greek mainland. It probably occupied the site of the earlier Saint Barbara’s church. It has an elaborately decorated facade, with a rich brick decoration; it was built according to the cloisonné masonry, i.e. finely dressed masonry which employs ashlar blocks surrounding by bricks. Furthermore, the high quality of its sculptured decoration indicates that artists from Constantinople itself worked on the construction of the monument.
Based on the careful construction of the monument, many researchers expressed the view that it was built with financial help of the emperor Romanus II and that the building was erected after the year 961, when Crete, which was occupied by the Arabs during the previous century, fell again into the hands of the Byzantines, confirming the prophecy of Hosios Loukas himself. The impact of Crete’s reoccupation is reflected on the earliest wall-painting of the Monastery, dating to the second half of the 10th century. It decorates the western wall of the narthex in the church of Theotokos and depicts the appearance of archangel Michael to Joshua, the leader of the Jews, right before the fall of the city of Jericho.
Slightly later, in 1011, the catholicon, the central church of the monastery, was built at the south-west part of Theotokos’ church, incorporating a small part of this building, in order to house the Saint’s miraculous relics, which attracts numerous pilgrims even nowadays. It is a Greek-cross domed octagon church, with a large dome resting on eight huge pillars. It may be regarded as the model church for all later monuments built according to this architectural type in Greece. The catholicon is impressive due to its luxurious interior decoration. The floor and the vertical surfaces of the walls are covered with coloured marble, while the upper surfaces of the walls are decorated with outstanding mosaics, exceptional examples of Byzantine art. The ethereal holy figures in the mosaics of the second and third decades of the 11th century are remarkable due to their anti-classical and abstract character. The three side chapels as well as the upper galleries of the catholicon are decorated with remarkable wall-paintings, dating a few years later than the mosaics.
The catholicon is built upon a cruciform crypt, where, against the northern wall, the saint Loukas’ original tomb is located. Two more tombs in the crypt may belong to wealthy abbots of the Monastery, or according to the tradition to the emperor Romanus II and his wife Theophano. The crypt is decorated with wall-paintings dating to the same period with those of the catholicon. They are full of soteriological connotations, in accordance with the crypt’s funerary function.
The catholicon was built on the initiative of abbot Philotheus, who is depicted among the holy figures on the wall-paintings of the catholicon side chapels and the crypt. His successors continued to embellish the monument in what proved to be a long lasting endeavour. The overall luxury of the monument somehow confirms the oral tradition, according to which the Byzantine emperors, Basil II and Constantine IX themselves contributed to the realization of the decoration.
The monastery was originally fortified; however, scarce remains are all that is preserved from its enclosure wall. Nowadays, the monastic complex includes a large number of auxiliary buildings and cells next to the two churches. Some of them belong to the 11th century construction phase of the monastery such as the restored refectory that, since 1993, houses an interesting collection of Byzantine sculptures.
During its long history, the monastery suffered great damage and was repeatedly looted, even during the recent WWII. The long process of conservation began in 1938 and continues to the present day. Since 1990, this spectacular monument is listed as a UNESCO cultural heritage site.