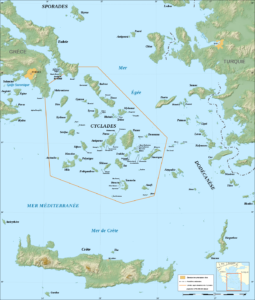 Some of the Cyclades, such as Mykonos, Santorini, Paros and Ios, have vigorously embraced the tourist industry; others, such as Andros, Kea, Serifos and Sikinos, are visited infrequently by foreigners but are favourites with holiday-makers from Athens.

Mykonos is the most expensive and heavily visited of all Greek islands. It has the most sophisticated nightlife and is the undisputed gay capital of Greece.

Barren, low-lying Mykonos would never win a Greek-island beauty contest, but it does have superb beaches.

The town is a mixture of chic boutiques and houses with brightly painted balconies draped in bougainvillea and clematis.

Santorini is regarded as the most spectacular of the Greek islands. It’s a “unique” sight.

Thousands of tourists come every year to gape at the caldera, a vestige of what was probably the world’s largest volcanic eruption, ever.

Despite the crowds who visit in summer, Santorini’s weirdness, apparent in its black-sand beaches and mighty cliffs, holds a distinct allure.

And if you want to escape the tourist crowds, Sikinos, Anafi and the tiny islands to the east of Naxos offer some respite.

# Spend an extra day in Kalambaka.Join a locally organised sunset, morning or hiking tour and remember Meteora for the rest of your life.