One (1) day private tour from Athens to Olympia

The only way to visit Olympia on a day trip is by hiring a self-driven car or hiring a taxi, or, taking our private day trip, preferably with the extra expense of a local guide.

– Starting from your hotel at 06.45 am, we stop at Corinth canal for a short photo-stop, and arrive at Olympia at 10.45 am.
– Meet the tour guide (recommended) and spend 3 hours with her, visiting the archaeological museum, and the ancient site. (The suggested guided tour is longer than any other guided tour, but it’s the size and the history of Olympia that makes it long).
– When you finish with the sightseeing, relax having lunch in the peaceful setting of the modern Olympia town, and
– At +/- 16.00 start the return trip and arrive in Athens before 20.00. An enjoyable and memorable full-day tour.

There is no price for 2 passengers. Persuade one or more friends to join you and share the cost of this day trip.
The price includes transportation and tolls. The entrance fees, and the lunch mentioned, are not included.
A local professional tour guide can be arranged at the extra cost for her lecture.

Plan a 2-day trip and combine the tour to ancient Olympia with an overnight in the beautiful Venetian town of Nafplion, Homer’s Mycenae and the sanctuary of Asclepius at Epidaurus, or, with the lakes of Polylimnio, the historical Navarino, and the rival city of Sparta, Ancient Messene, an archaeological site, generally accepted as the most beautiful site in Greece. Following our suggestions, the hotel is chosen and paid for by you.

The air-conditioned minibus seats up to 8 passengers, and the driver, in 3 rows of seats.

As a day trip Olympia cannot be visited on a tour bus. It is outside the mileage and working hours of a bus driver. The only way to visit it in a day trip is by hiring a self-driven car or a taxi, or by taking our private day trip.
Ancient Olympia, the Acropolis of Athens, and the Oracle of Delphi are 3 sites that the services of a professional tour guide are appreciated. There are a lot of amusing myths and interesting stories about ancient Olympia and the Olympic Games that the tour guide will talk about.

* The four Pan-Hellenic Games. The Games at Olympia was one of them. The other 3 were, the Isthmian, the Pythian, and the Nemean Games.
* Olympia was not a city as such. It was the sanctuary, the stadium, the sports facilities, the VIP hostel, and the administration buildings,
* The city responsible for the organization of the ancient Olympic Games that took place at Olympia was ILIS, +/- 30kms from Olympia,
* The huge temple of Zeus, which housed one of the 7 wonders of the ancient world, the statue of the god, made by the sculptor Pheidias.
* The structures in the “sacred” sanctuary were made and dedicated to the gods, except the Philippeion and the villa of Emperor Nero.
* The Zannes, being the statues of the cheaters. (Emperor Nero was the biggest cheater of the ancient Olympic Games).
* The amazing organization of the ancient Olympic Games, similar and even better than today’s organization.
* The females had their own Games, the Heraia Games that were organized in favour of goddess Hera.
* The story of Kallipateira, the mother that disguised as a man watched her son competing and winning in the Games.
* The story of Kyniska, the cheeky Spartan princess, a chariot owner, that became the first female Olympic winner.
* The lighting of the Olympic flame and the torch relay is celebrated every year (summer, winter, youth Olympics, etc).
* Following the Baron’s last wish, his heart was buried at Olympia. It is at the base of the monument on the I.O.A. grounds.
* The emblems (the five Olympic rings) of the modern Olympic Games, revived by Baron Pierre De Coubertin.
The ancient Olympic Games started about 3000 years ago when Hippodameia, daughter of the local King, Oinonaos, married Pelops, who decided to name the whole peninsula after his name and called it Peloponessus (= Pelop’s island). However only in 776 BC, the first Olympic Games’ win was recorded, and that year marks the first Olympiad. Since then, every four years the Olympic Games were held attracting athletes of Greek origin from all the Greek city-states. At Olympia, the victors’ prize was an olive branch wreath. A month before the opening ceremony, until a month after the closing day of the games, the Olympic truce was in effect and all hostilities were suspended, for the spectators to visit Olympia and return safely from Olympia to their city-states. 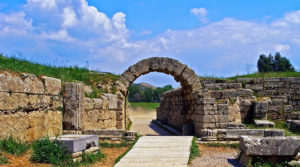 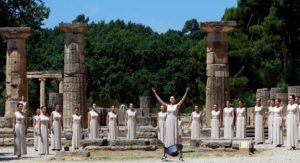 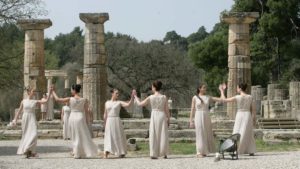 The Greek people are friendly and welcome you to Greece.

Greek people in majority are well manored, smiling, helpful, and optimistic personalities. English language is widely spoken.
It’s very likely you’ll be as charmed by the Greek people as you will be, by Greece’s beautiful landscape.
Athens is still one of the safest European capitals.

A guided tour is the best way to see places

We offer the tours without the entrance fees, caring for clients that are allowed to enter to sites & museums f.o.c. or by paying discounted entrances.
Our final prices are not matched by any other company. After 60 years of organizing tours throughout Greece, we have secured the best deals.
CLICK on the links of every tour and see all the information. To help you choose what tour to take detailed information is included on each tour with descriptions, itineraries, prices and what is included, location details, operating days, admission rates, maps and facilities. We do hope that you find the time to explore the rich heritage of Greece and that your visit will be a rewarding and enjoyable one.
We would welcome your feedback, good or bad, in the trip advisor link.

Cruises to the Aegean islands

All options to visit

Other services that we offer:

# CLICK and see the ENTRANCE FEES that must be added to our prices.

# CLICK and see our DISCOUNTED OFFERS for the guided tours that start from Athens.