Temple of Hephaestus or Thisseion

The temple of Hephaestus is the best-preserved ancient Greek temple in the world, but is far less known than its neighbour, the Parthenon. 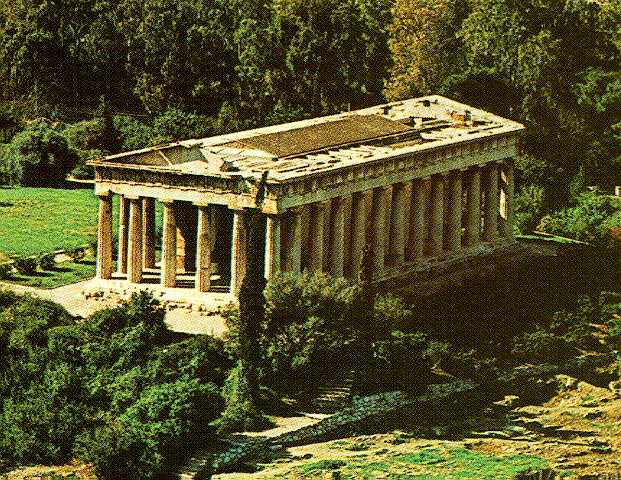 The Temple of Hephaestus and Athena, the first in Athens to be made of marble, begun two years before the Parthenon, in 449 BC sponsored by Pericles and designed by Ictinus, one of the architects who worked on the Parthenon. Located 500m north-west of the Acropolis, in a district which contained foundries and metalwork shops, the temple was dedicated to god Hephaestus, the god of blacksmiths and metallurgy, standing on a slight rise commanding a fine view of the Agora.
Built in Doric style of marble from Mt. Penteli, the temple is hexastyle, with 6 columns under the pedimented ends, and 13 columns on each side (counting the corner columns twice). The temple is peripteral, with columns entirely surrounding the central enclosed cella. In the entablature there is the plain frieze that is expected with the sober Doric mode, but above it in the spaces between the triglyphs, the labours of Heracles are depicted. Sculpted into the low-relief metope is the story of Theseus and of his quest to kill the minotaur.

Unlike the Parthenon, the temple has all its columns and pediments intact, and even most of its original roof. Its friezes and other decorations, however, have been badly damaged by thieves and looters over the centuries. It owes its survival to its conversion to a Christian Church, the Church of St George, in the 7th c. AD. The survival of the exterior came at the cost of the ancient interior, which was removed and replaced by the structures of a Christian church.

During the centuries of Ottoman rule in Greece, the temple was the main Greek Orthodox church in Athens. When King Othon, entered the city in 1834, the service welcoming him to his new capital was held in the church.Today the temple has been preserved as an archaeological site under the supervision of the Greek Interior Ministry. The temple itself has a small fence, but the visitor can get much closer than is possible at the Parthenon or most other antiquities in Greece. The temple is surrounded by an ornamental garden. The site gets much less tourist traffic than the Acropolis and is a pleasant green spot in the heart of Athens.

History of the temple
The temple is also known as Theseion believed to be a shrine dedicated to the Athenian hero, Theseus. This was based on the depictions of Theseus on the metopes, but cult statues of Athena and Hephaestus (carved 421-15 BC) in the temple have shown the designation to be incorrect. Following a belief current in Byzantine times that the bones of the legendary Greek hero Theseus were buried there; in fact the bones alleged to be those of Theseus were buried in the 5th c. BC at another site nearer to the Acropolis.

In the 7th c. the temple was converted to the Church of St. George Akamas. The east end was given a semi-circular apse and walled in to form a modest square building. In the early 19th c. this temple-church became a burial place for many Protestants and those who died in the Greek War of Independence in 1821.
The church remained in use through 1834, then became a museum until the 1930s. It has since been restored to its original Greek appearance.

Myth and Mystery
Hephaestus, the Greek god of metalworking and volcanoes, was the only one of the Olympian gods who was physically imperfect. He was lame and one who had to perform manual labor. He worked as a blacksmith and was responsible for crafting the armor with a fatal weakness worn by Achilles in The Iliad.

The temple is also dedicated to Athena Ergane, a form of the city’s patron goddess responsible for pottery and other crafts.

What to See at the Temple of Hephaestus
Located on Kolonos Agoraios hill overlooking the Agora, the Temple stands on an elevated platform. A Doric peripteral temple with some Ionic elements, the temple consists of a rectangular enclosure surrounded by an outer colonnade on all four sides. The building is constructed of Pentelic marble and decorated with sculpture in Parian marble. The ceiling is wooden, the roof tiles are made of terracotta, and there is a limestone step at the bottom of the platform.

Inside, the space is divided into a pronaos (foretemple), a cella (inner shrine, with an interior colonnade) and an opisthonaos (rear temple). The east end of the enclosure is open, allowing the rising sun to illuminate the altar at the west end of the cella. Colossal bronze statues of Hephaestus and Athena flanked the altar.

The friezes on the east metopes (facing the Agora) are the finest, depicting the Labours of Hercules. The four easternmost metopes on the north and south sides depict the Labours of Theseus. The frieze over the pronaos shows a scene from the Battle of Theseus and the Pallantids, with the gods looking on, while the frieze over the opisthonaos depicts the Battle of the Lapiths and Centaurs.

Little of the pediment sculpture has survived, but some fragments are on display in the Stoa of Attalus. The east pediment depicted the deification of Hercules and the west had another scene from the Battle of the Lapiths and Centaurs.


The Agora was the heart of ancient Athens, the focus of political, commercial, administrative and social activity, the religious and cultural center, and the seat of justice. The site was occupied without interruption in all periods of the city’s history. It was used as a residential and burial area as early as the Late Neolithic period (3000 B.C.). Early in the 6th century, in the time of Solon, the Agora became a public area.

After a series of repairs and remodeling, it reached its final rectangular form in the 2nd century B.C. Extensive building activity occurred after the serious damage made by the Persians in 480/79 B.C., by the Romans in 89 B.C. and by the Herulae in A.D. 267 while, after the Slavic invasion in A.D. 580, It was gradually abandoned. From the Byzantine period until after 1834, when Athens became the capital of the independent Greek state, the Agora was again developed as a residential area.

The first excavation campaigns were carried out by the Greek Archaeological Society in 1859-1912, and by the German Archaeological Institute in 1896-97. In 1890-91, a deep trench cut for the Athens-Peiraeus Railway brought to light extensive remains of ancient buildings. In 1931 the American School of Classical Studies started the systematic excavations with the financial support of J. Rockefeller and continued until 1941. Work was resumed in 1945 and is still continuing. In order to uncover the whole area of the Agora it was necessary to demolish around 400 modern buildings covering a total area of ca. 12 hectares.

In the 19th c. the four colossal figures of Giants and Tritons at the facade of the Gymnasium were restored by the Greek Archaeological Society. In the years 1953-56, the Stoa of Attalos was reconstructed to become a museum and in the same period the Byzantine church of Aghioi Apostoloi, built around A.D. 1000, was restored by the American School. Between 1972 and 1975, restoration and preservation work was carried out at the Hephaisteion; the area was cleared of the vegetation, and the roof of the temple was repaired in 1978 by the Archaeological Service.


The stoa was erected at the end of the 5th century B.C. in honor of those who fought for the freedom and security of the city. Socrates is said to have met his friends in this stoa.

Temple of Apollo Patroos – Small Ionic temple, erected in ca. 340-320 B.C., identified as the temple of Apollo who was worshipped as the “Father” (Pater), the founder of the Ionian race. Inside the cella stood the cult statue of the god, made by the famous sculptor Euphranor.


Remains of an oblong pedestal enclosed by a fence. It supported the bronze statues of the legendary heroes who gave their names to the ten tribes of Attica. In addition to its honourary function, the monument served as the official notice board of the city. It is dated to the second half of the 4th c. BC.