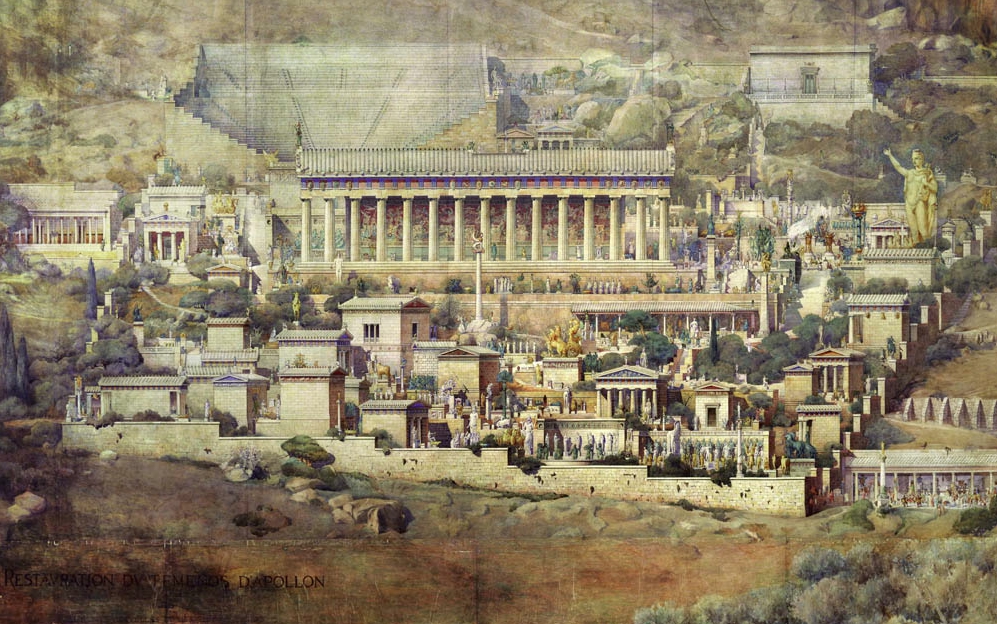 The ancient Delphi site with the treasuries and the temple of Apollo. Photo by Albert Tournaire

We want you to have a memorable time in Greece! Let a local tour expert organize your tours and make your dream come true.

Delphi is one of Greece’s most important tourist attractions. Easy to visit on a One day tour from Athens all year round.

The sheer magnificence and grandeur of the location strike you. Below the site, a valley ringed by mountains provides breathtaking views from any location within the site. Delphi was the most sacred place in the ancient world. A temple dedicated to the god Apollo was built in the 7th c BC. and housed the Oracle of Delphi, the greatest source of income for a thousand years. Delphi became a religious centre. Kings and common people came to consult the priestess called PYTHIA. In a secret room below the tripod of the Pythia, the priests of Apollo interpreted her vague and wild cries and put them into ordered language. The idea was: build a treasury house for your city-state, bring your valuables and we shall keep them for you in it.

The archaeological site today with the treasuries, the ancient temples, and the shrines, is one of the best in Greece, making Delphi one of Greece’s premier tourist attractions. It is a 2.30-hour drive from Athens making the one-day tour to Delphi a comfortable trip.

The Delphi museum houses impressive statues, jewelry, and other wares unearthed from the site.

Unless you are a history guy you need a full hour to explore the ancient site. The Sacred Way starts at the ticket booth. It winds up past a number of Treasuries and leads to the Temple of Apollo, where the Oracle was sitting.

– Lunch(3 course menu) is served in a restaurant outside modern Delphi and costs 10.00 € extra for everybody.
– Fill the booking request and start the communication. We shall get back asap.

The tour services include:
– transportation on modern air-conditioned buses
– the services of the professional tour guide all along
– entrance fees to the sanctuary of Apollo and the archaeological museum in Delphi, and
– Pick up/drop off from or near your hotel (See the list of hotels in the footer of this website).
– Shortstop in the picturesque village of Arachova, a popular winter destination in Greece.

MORE OFFERS and DISCOUNTS (only one discount allowed – the highest one):
a) GROUP DISCOUNT: Make a team of 5 full paying or more passengers and gain 5%
b) DELPHI & the 1 day CRUISE Combine the Delphi tour with the One day cruise to the 3 islands and pay 135.00 € for both

The ONE DAY DELPHI TOUR can be organized as a private excursion (cost-shared between the passengers):
– Transportation of 1-4 passengers = 260.00 € (5-8 passengers the extra cost is 10.00 € per person).
In this private tour a) entrance fees, lunch, and drinks are not included in the price, plus
b) a local professional tour guide, can be arranged to meet you in Delphi at an extra cost.

WRITE A REVIEW ON OUR SERVICES. Your feedback helps us offer a better service.

Copied from a client’s blogpost:
The tour which I joined was organized by G.O.TOURS. Information about the tour can be found at their website at http://www.gotours.com.gr/en/
However, I did not book through their website. I booked it through ASTORIA TRAVEL https://astoriatravel.gr/
After browsing through the web, I found that ASTORIA TRAVEL offers the cheapest tour packages in Athens. Initially I was quite skeptical. How can this tour agent offer such a low price (20% cheaper) compared to the travel company’s price? Is this a scam? Well, believe it! It was not a scam. I even booked my first two nights in Athens at Hotel Arethusa (next to Syntagma Square) at a very cheap price through ASTORIA TRAVEL.

HOW TO BOOK A TOUR | BOOKING FORM | PAY ONLINE | CONTACT US

If there is a site to visit in Greece then Delphi is this place. The sheer magnificence and grandeur of the location strike you. God Apollo had chosen the best spot to build his temple. Below the site, a valley ringed by mountains provides breathtaking views from any location within the site.

Delphi was considered to be one of the most important cities of ancient Greece. It was believed to be home to the goddess Gaia, or Earth, and later to Apollo after slaying Gaia’s son, the snake Python. The Pythian games—similar to the Olympic Games—were held here every four years to honor Apollo’s slaying of the Python dragon.

According to the myth, Zeus released two eagles. The one flew east and the other one flew west. They both met over Delphi, determining that the centre of the world was there. A temple dedicated to the god Apollo was built there in the 7th c BC. The Temple of Apollo housed the great Oracle of Delphi, the world’s greatest source of income for a thousand years. The Oracle was the most eminent feature of Delphi, and some of the most important people from all over Greece—including demigods, according to Greek mythology—visited her to seek advice. The oracle of Apollo became a religious centre where common people and kings alike, came to consult “Pythia”, the priestess of the sanctuary. In a room, below the Pythia, the priests listened and interpreted her vague and wild cries, and put them into ordered language.

Above the entrance to the temple of Apollo, the visitor reads ‘Know Thyself’ and ‘Nothing in Excess’. These sayings were read and pondered upon by all of the great kings, warriors, and noblemen who came here for advice. The true wisdom of the Oracle lies not within the words of the Oracle’s priestess, but within the walls of the temple itself.

The Pythian Games held in Delphi were one of four Panhellenic games held in ancient Greece, and they attracted competitors from all over the Greek world. Founded in the 6th c. BC and held in honour of Apollo the Games originally centered around the talents the god exemplified – music and poetry. However soon, athletic competitions were added as well. The best known was a great chariot race, held in the stadium of Delphi. The winners of the Pythian Games received a laurel wreath.

The 6th c. BC saw the political rise of Delphi ushering in a golden age that lasted until the arrival of the Romans in 191 BC. Numerous treasuries were built in the Sanctuary of Apollo to house votive offerings of grateful pilgrims. In the 4th century BC, a theater accommodating 5,000 spectators was constructed nearby. It was restored in 159 by king Eumenes II and later by the Romans.

The oracle of Delphi was abolished in 393 AD by Theodosius of Byzantium, the emperor who made Christianity the official religion of the Byzantine Empire. No longer used, the temples fell into disrepair and their materials were plundered for new buildings.


Delphi was the most sacred place in the ancient world and thousands of pilgrims visited here, from kings and philosophers to common people to hear the prophecies of the Oracle and to watch and compete in the ancient games held here, the Pythian Games, similar to the Olympics.
The archaeological site is one of the best in Greece with ancient temples and shrines placed along the sacred way, making Delphi one of the best places to visit all year round. The site consists of the temple of Apollo, the treasury houses of the City-States, the ancient theatre, the stadium at the top of the hill, the gymnasium, and hippodrome. The sanctuary was built in an imposing location, on the slopes of Mt. Parnassus. The Temple of Apollo, the treasury house of the Athenians, the Polygonal wall, the treasury houses of the different city States — where treasures from all over Greece were kept, and the Theatre are some of the most important buildings.

The remaining part of the ancient site, bellow the road, with the temple of Athena Pronaia, the Tholos (a circular structure with 3 of its original 20 doric columns restored), the gymnasium, and the sports facilities, used for training for the athletes that took part in the “Pythian or Delphian Games”, is not visited in the guided tours. Choose the tour without lunch and when the group is having lunch you can visit them on your own, without the tour guide.

Today, next to the archaeological site, there is an impressive museum, displaying findings from the local excavations, that started in 1892, masterpieces of Ancient Greek sculpture. The highlights are offerings by the oracle visitors, such as the famous bronze statue of the Charioteer, the statue of Antinoos, the famous athlete Aghias, the two “kouros” statues, the Roman “omphalos”, being the sculptured stone that represented the navel of the world, and many others.

When you finish with the sightseeing, you proceed to a local restaurant for lunch (optional), and after lunch, the driver stops for 40 minutes at the nearby traditional village of Arachova. The bus arrives in the center of Athens at +/- 18.30.

Re: Astoria Travel Meteora trip Reviews.
Hi SomeGirl111. All the bus tours in Greece are organized by three Tour operators. The travel agents do not organize, they sell these guided tours at discounted rates. So, whoever you decide to buy your tour from, you will end up sitting in one of the T.O. buses. All three T.Os. use modern, air-conditioned buses., and knowledgeable professional tour guides. You travel on the same bus as visitors that paid the full brochure price. Astoria Travel was established in 1958 and is still operating and prospering. So, your question should be: is the price that they sell the tours organized by G.O.Tours, CHAT, or KEY Tours, good? What differs between the travel agents, is how fast they reply to you, and the way they answer your request. Being in the travel trade for such a long time, I am sure that they know the way to satisfy their clients.

In the footer of this website you find the “4 steps to make a booking”. If our offer sounds interesting, please send us the booking form.